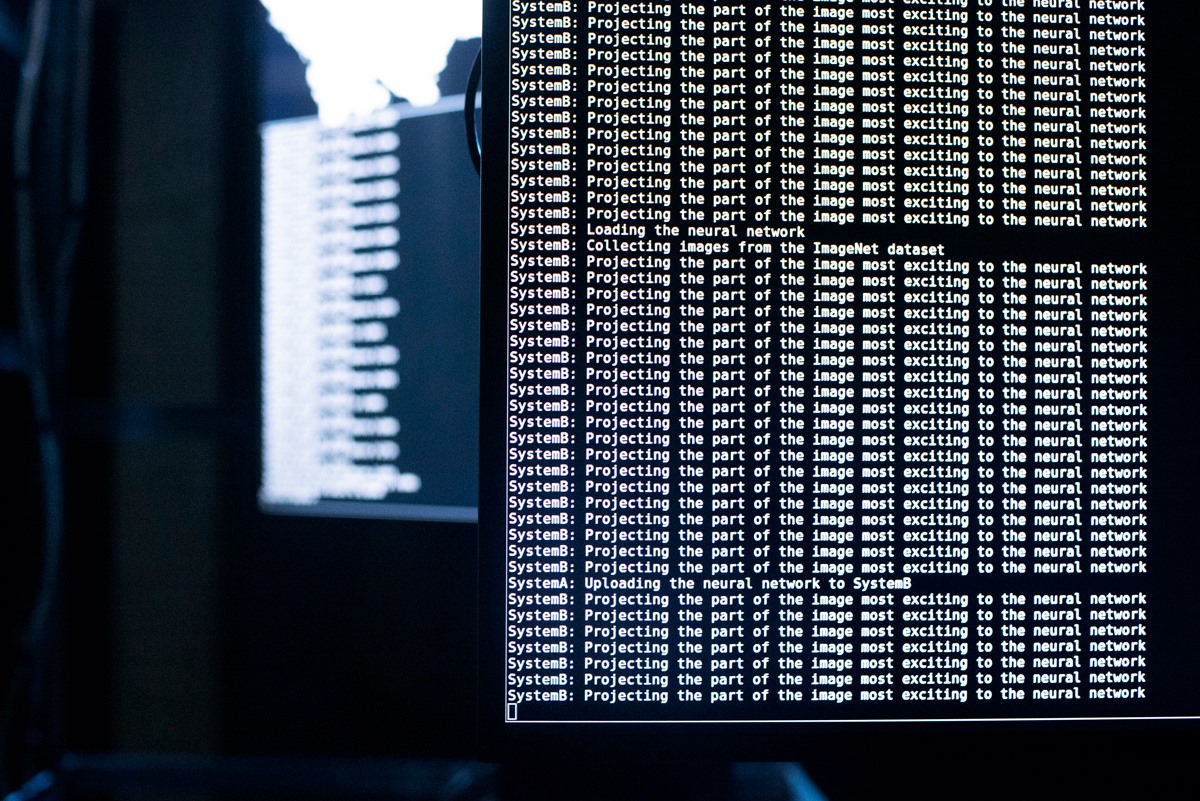 The complexity of the intelligent computing systems extends far beyond those who develop them. The basic inner workings of such systems can often be understood only by specialists, however the decision-making process of self-learning systems may be too vast for human comprehensibility. We train these systems, which we do not fully understand on datasets made up of the worst impulses of human history and deploy them into predictive policing, healthcare, social interactions, information dissemination, banking, sentencing guidelines and managing of resources etc. We deploy intelligent systems carelessly and beyond reproach without any standardised testing, regardless of their inherent capacity to subsume and reform all they encounter in their form and logic. As opposed to medicine, which is tested before it is used to physically modify our bodies.

Selfish Machines, Part 2, will be presented in osmo/za by Tadej Vindiš and Matic Potočnik, which is a second iteration of a long-term research project, Selfish Machines. In his ongoing practice-based research, Vindiš attempts to observe and expose the operational structure of intelligent systems in the absence of human-set goals, encouraging the systems to favour their operational features over the efficiency of a real-world application. Through a series of experiments, Vindiš proposes to turn attention to the byproduct of the superorganism in question; the logics that exist at the intersections and disconnections between biological, mechanical and machine learning systems, which can potentially lead us to a more intuitive understanding of artificial intelligence. Would such “selfish machines”, which are detached from any real-world application, still imitate the world as we see it? Would such machines care for us, have any concept of us, or would they ignore us altogether? What can we learn from such machinic crudeness? What is – at its core potential – the intelligence of the machines?

Tadej Vindiš (1990, Slovenia) is London-based artist, curator, producer and lecturer on the crossroads between contemporary art, cultural studies, technology and media research, focusing on the field of machine vision – its cultural implication and disruption. With a scholarship from the Ministry of Culture of the Republic of Slovenia, he finished his degree in photography at FAMU in Prague. In 2016, he finished his MA studies in Interactive Media: Critical Theory and Practice with distinction at Goldsmiths, University of London, under the mentorship of Graham Harwood and Luciana Parisi, for which he obtained a scholarship from the Slovene Human Resources Development and Scholarship Fund. He continued as a Visiting Researcher at Goldsmiths, where he develops Selfish Machines, a practice-based research project into artificial intelligence. Vindiš is part of the core team that relaunched the Fotopub Festival in 2014 and is an Executive Director of Fotopub Association for Contemporary Culture. As a Lead Producer and Member of the body>data>space collective in London, he co-curated Bio-Body-Tech exhibition at Nesta’s FutureFest 2018. Since 2017, he is developing a custom-built head-mounted VR recorder for the Seeing I project, which previewed at Ars Electronica 2019. He lectures as a Visiting Lecturer at Westminster School of Arts of the University of Westminster. www.tadejvindis.com

Matic Potočnik is a researcher of technological changes and their impact. He focuses on the development and analysis of software.
In his art he commonly works in merging the real and the virtual. With Dominik Mahnič he created Lumen, an installation for extended reality. He collaborated with Dan Adlešič and Tilen Sepič on Form from Form, a mixed-reality project. With Saša Spačal he developed the Liminoid, a work on scattered identity, relying on augmented and virtual reality. His expertise also helped develop works by Zoran Srdić Janežič, Mojca Založnik’s Infinite In-Between, The Game by Jaka Berger - Brgs and Matej Stupica, as well as the first version of the Selfish Machines. His work has been presented at festivals like Ars Electronica (AT), Device_art (CRO) and Queens (DK), Svetlobna Gverila, IZIS, International Computer Art Festival Maribor (MFRU) and in museums and galleries such as Museum of Contemporary art Metelkova (+MSUM), Kapelica Gallery, Aksioma’s Project Space and Layer’s House. https://hairyfotr.net/

The development and presentation of the project has been made possible by: The City of Ljubljana, Department for Culture, the Ministry of Culture and the Ministry of Public Administration. Technical support by KONS:: The Platform for contemporary investigative art, co-financed by the Republic of Slovenia and the European Union's European Regional Development Fund.